End of an era as gumtrees get chop

Esther Mabin says it’s going to be hard to find her driveway in the dark, now that the huge, century-old gumtrees that marked the gateway at Taniwha have been felled. The trees that stood sentinel on the perimeter of the family’s SH2 property, south of Waipukurau, had been planted “at least a century ago” Esther said. Though quite a few trees were lost to a storm in the 1990s, the remainder had been a landmark, pointing out the entrance to Taniwha Daffodils where every second springtime the public would be invited in to wander the fields of flowers and purchase bunches of daffodils as a fundraiser for Plunket. “Sadly, over the past few years we have been watching disease gradually destroying the gums,” Esther says, and the tough decision was made to take the dying trees down due to the risk of them falling on the roadway, motorists or powerlines. “It was not a decision we made lightly. All over Hawke’s Bay, mature gumtrees are dying from disease. It has ended the lives of our trees prematurely. We drove under those trees all the time, they have been here since the days of horses and carts, seen the introduction of the first cars and now stood while trucks and traffic roar past. “It’s the end of an era. They have seen so much life pass under them. The day they were to be taken down I took photographs and thanked them.” The family has a memento of the trees, in black-and-white photos taken by Helmut Hirler when they realised they might have to be taken down. One tree, still healthy, remains in the paddock beyond the driveway and it will soon be joined by more. “We love trees. We have marked out planting sites for replacement trees, not as tall-growing and set further back.” The timber from the old gums will be cut up for firewood as it is not suitable for building or posts due to it twisting and warping. 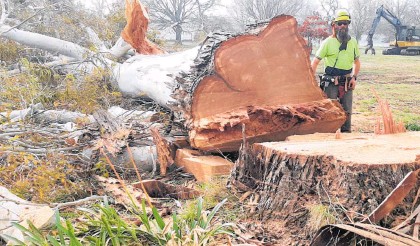