Waihi's VIP JP decides to sign off after 32 years

Always available to those needing help 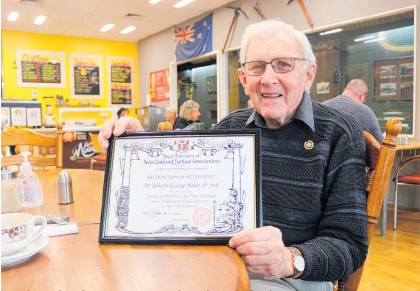 Selywn Baker has lived in Waihi for all of his 86 years, and has always been focused on serving his community. He spent the past 32 years as a Justice of the Peace, and has now decided to retire from the role. The position involves witnessing of documents, taking of declarations, swearing of affidavits or affirming affirmations, and for some (including Selwyn), minor district court duties. The decision to retire was made after a busy 2021, during which 106 people came to his house to utilise his services. Despite the busy schedule, Selwyn always made himself available to those who needed him. “You try to do the best you can... if i was in their shoes, what would I like [someone] to do?” Thirty-two years ago, he was headhunted by a member of the community to take up the role. After a comprehensive vetting process, including training and questioning of those who knew him, he took up the title and began his service. He describes a Justice of the Peace as “someone to recognise . . . that [a] person is fair dinkum, and they’re not pulling your leg”. Selwyn had owned a joinery factory in the town, as well as serving as a councillor for the area for 15 years. His father taught him that “if you get money from the community, you’ve got to be prepared to put money back into the community”. He felt he had a duty as a business owner to give back to those who helped him keep his business running. “The community sort of help you in that respect . . . you should return the compliment to them in some way or another. “I don’t think I did anything special, but I certainly sort of pulled my weight.” He said the pressure and prestige of the position were not something he took lightly. “People out of town judge something by what you approve of . . . a lot of responsibility, that’s you’ve gotta have the right community backing.” But he treasures the way he was able to help people in their time of need. “You were the person that sort of made them pick up and feel better,” he said. Although not everyone has offered him that same courtesy — he’s had people come to his house for assistance and end up swearing at or berating him. “You wouldn’t think people in their common sense would do that, but you get . . . people whose values are completely different to what yours are.” A clear lesson he’d taken from his work was “not to judge [a person] by their look”. “You meet all sorts of people in all sorts of situations, and some of them can be quite sort of bizarre,” but Selwyn says it’s not his job to judge. Selwyn says it was sometimes difficult to deal with situations involving people he knew personally, but having to “discard that completely” in dealing with it. “That’s quite difficult to do.” Selwyn and his wife Dorothy have three children and seven grandchildren. He’s looking forward to being able to spend more time with them now that he won’t have so many appointments to work around. Selwyn said Dorothy is “pleased to see [him] retire” after three decades of house calls.