Mayoral hopeful wants to talk to those involved 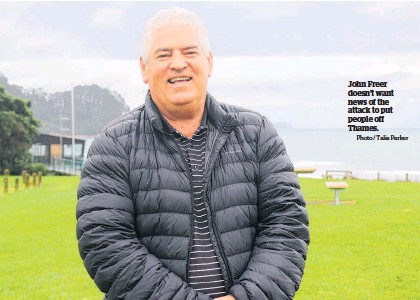 Thames Coromandel District mayoralty hopeful John Freer says he’s yet to recover mentally from being set upon and hit by a youth in the mall he manages in Thames. “It’s just a weird experience. I’m not recovered mentally but Debbie my wife is a nurse and I have really good mates. My mountain bike is also great support.” However, he said he doesn’t want the publicity of his attack — which occurred inside the Goldfields Mall when he told a group of youths to leave — to put people off Thames. “This is the first incident of this kind in two years. I’m looking at it as a one-off scenario. “We, as mall managers, have been discussing at length and we’re mindful of the potential threat to other people so we have a strong health and safety plan in place. We have businesses to be mindful of and we don’t want visitors being uncomfortable.” Freer said he had asked a couple of young people to leave the mall because they were causing a disturbance. “One of them followed me back to the office and hit me from behind and kicked me, when I turned around, half a dozen of his mates were there coming at me as well.” The incident had been a shock. “I think we all sit on the fringe of this sort of thing until it happens to you. “The first thing I asked was ‘what sort of thrill does a teenager get from bashing a 60-year-old? “I’m looking forward to the chance of having a positive conversation with those involved. I don’t know this person, but he had a damn good punch on him. Why don’t we get them into boxing? Billy Graham has turned hundreds of kids around through boxing. “There’s lots of opportunities, let’s channel that aggression into something positive.” Thames police said inquiries were ongoing after reports of an assault on July 22. Freer is a mayoral candidate for the upcoming Thames-coromandel District Council elections. Asked if he thought councils had a role in finding possible solutions to disruptive and harmful behaviour by youth in a community, he said councils had changed significantly. “There are lots of health and wellbeing and community issues that council haven’t considered and need to be considered in the future because we can’t rely on the Government to deliver. This falls into that category. I believe councils and community boards have to move into this space if it’s going to be an issue moving forward. “We live in a semi-tourist town, we’ve got to make sure our reputation is high, we want people to come to visit our area, so we’ve got to make sure we stop this, so we don’t become known as a place that isn’t safe.”