Horizons Regional Council has put out the call for public submissions on establishing designated Ma¯ori representation around the council table. The council has until May 21 to decide whether to establish a Ma¯ori constituency in time for the 2022 local body elections, after a recent law change gave local authorities the sole right to decide on Ma¯ori wards without the risk of citizens-initiated referenda. The council hasn’t yet formed a position on whether to establish a ward, but has agreed to consult the public on the move. A survey has been sent to people on the Ma¯ ori electoral roll, and is also available online for anyone to complete before 8am on May 10. Horizons Regional Council has 12 councillors covering six constituencies — four for Palmerston North; two each for Horowhenua, Manawatu¯ -Rangit¯ıkei, and Whanganui; and one each for Ruapehu and Tararua. The council said it was likely there would be two Ma¯ ori ward councillors. They could represent one Ma¯ori constituency each or both could represent a single Ma¯ori constituency that covered the whole region. The move to consult on wider representation follows the council formally adopting iwi voting rights for the first time on one of its committees. The council’s Climate Action Joint Committee was formed earlier this month, and focuses on mitigation and adaptation to climate change. It’s the first time iwi representatives have been invited on to a committee and granted full voting rights. Other local authorities have made the move towards full Ma¯ori representation, with Taranaki Regional Council voting earlier this month to establish a ward after a series of public submissions. In November, South Taranaki District Council also voted to establish a dedicated constituency, while in October Ruapehu District Council supported the creation of a ward. Whanganui and Rangit¯ıkei District councils have not resolved to establish dedicated representation for next year’s local body elections, and it’s not believed there are any plans to vote on the issue before the May 21 cutoff. Mixed views on consultation Whanganui-based Horizons councillor David Cotton said he supported the idea of consulting iwi about whether they want a Ma¯ori ward, but said the six-week timeframe was too short. He doubted whether the council could get “a good steer” in that time. The consultation was also happening at a time when Horizons was pushed for financial resources and its staff were pushed for time, due to the long term plan and the shovelready projects. Cotton said he was also concerned about the cost of the consultation, which he believed would be between $150,000 and $180,000. He said he was open to the idea of a Ma¯ ori ward, but there were other ways of getting input from iwi. “Would they prefer to have management agreements with Horizons, in the areas that they operate?” Horizons’ other Whanganui-based councillor Nicola Patrick said she originally put a motion to explore the issue of Ma¯ori representation in time for the 2025 local elections, but supported exploring it now instead. “I was really pleased with where we’ve ended up, which is to give it a crack for 2022.” Patrick said she understood there were mixed views among the Ma¯ori community, as seen in the Whanganui District, where some Ma¯ori leaders were apprehensive of designated wards, cited by Whanganui mayor Hamish McDouall as the reason the idea hadn’t been progressed by his council. The key was to ask the question and listen to the views of the community, Patrick said. “By asking the question, if we get a really clear message, then that will strongly influence us in favour of going ahead.” Horizons chairwoman Rachel Keedwell said the council was trying to work with iwi “in a whole range of spaces”. Horizons Regional Council has been contacted for confirmation of the cost. 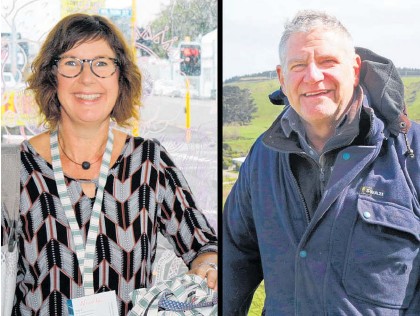