Photographs of stoats at Mount Holdsworth in Tararua Forest highlight the ongoing need for effective predator control — like 1080 poison drops — according to the Department of Conservation (DOC). Predator monitoring cameras set up by DOC in December within an area recommended for joint DOCOSPRI Project Ka¯ka¯ predator-control were collected in February. This was part of a trial for an improved camerabased predator monitoring method. All 10 cameras captured images of stoats. DOC Wairarapa Supervisor Briggs Pilkington says this is a worrying indication of the number of predators in the area and demonstrates the importance of ongoing predator control. “The Project Ka¯ka¯ zone is home to a range of taonga species, such as ka¯ka¯, po¯pokatea/whitehead and kakariki, where predator control is carried out by DOC and the Donnelly Flat Ground Control Volunteers. Stoats and possums are the main predators of ka¯ka¯. Nesting females are particularly vulnerable while they are incubating eggs within tree cavities. It can be difficult to confirm stoats are in an area unless you catch them on camera even when you strongly suspect they’re around, so it’s a bit scary that these cameras have captured so many images. “Given the locations of the cameras, it’s likely these are multiple animals, all within the Project Ka¯ka¯ area. You don’t need many stoats to have a problem.” Stoats are incredibly efficient and relentless predators, able to climb and often use a strategy of killing everything in sight and storing the surplus for later. They have large home ranges, often between 40 to 100ha. At this time of year, they are moving around as young stoats seek out their own territory. Stoat population numbers tend to increase when there is a reasonable rodent population, so seeing stoats confirms there is likely a healthy population of rats — another predator for taonga species. Although the trapping the volunteer group carries out is essential for staying on top of predator numbers and is key to the successes of Project Ka¯ka¯, groundcontrol methods have limits, Briggs Pilkington says. “Ground-based control is good in accessible areas but can’t be easily scaled up to respond to immediate predator threats, especially over large areas with steep terrain like in the Tararua ranges. “That’s why we seek to do operations with biodegradable 1080, which can be applied by air over large areas of rugged terrain to supress predators like rats and possums, and stoats. “Ongoing predator-control is paramount. The actions we take now will supress populations for a while, but if you don’t keep on top of predators they will keep coming back. “Taonga species and their habitat are increasingly under threat.” 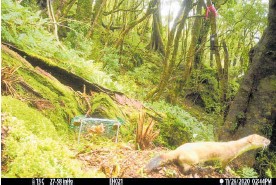