local growers. “We have a locals-first job policy,” said Clarke. “But RSE workers do play a crucial role in our business.” Both Lewis Farms and Woodhaven Gardens have a large local workforce and operate yearround. RSE workers are people from Pacific Islands who come and work here year after year to raise the standard of living back home. “We often suggest after they have acquired a much better home and education for the kids that they pass the job on to someone else in their community, so they have the same opportunity,” said Lewis. “Many of these workers, who are an integral part of our workforce, support multiple families, sometimes whole communities.” For those growers not producing year-round, RSE workers are even more important, said Clarke. “Even for us they form 20 per cent of our workforce. They work in jobs for which recruitment is the hardest.” The RSE scheme has been in place since 2007 and the number of workers allowed in under this scheme has steadily risen. According to Horticulture New Zealand, the scheme is of great benefit to the Pacific Islands. It encourages economic development, raising the living standard for many. In 2018, the RSE scheme saw the Pacific Islands benefit by more than $40 million. “The RSE scheme has been recognised by the World Bank as being one of the best migrant labour schemes in the world,” according to Horticulture New Zealand. In both 2019 and the 2020-21 season 14,400 workers were let in. “This scheme is much better than just giving aid. They earn real money and we can harvest our crops on time. So it goes both ways,” said Clarke. “RSE workers are grateful for the work, especially because they can earn up to 10 times what they can earn at home.” To get those RSE workers on the farm, growers are prepared to go to extraordinary lengths. “It costs us $20,000 extra per worker on top of the wages we pay them and we are legally required to pay at least $2.50 above the minimum wage, though we pay above that.” Woodhaven Gardens has held on to much of last year’s crop of RSE workers, who stayed behind. “If they had managed to go home, I do not think we would have been able to get them back in by now.” He said his business is doing okay so far and is able to employ a few off-season workers too. 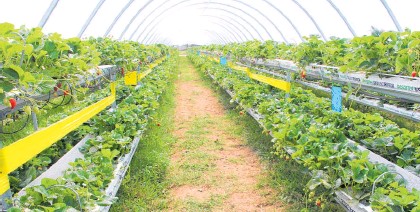