The moment Foxton teenager Maniah Summerell realised she wanted to commit to weightlifting, a weight was lifted from her shoulders. The New Zealand recordbreaking 18-year-old admitted to having doubts when she initially dipped her toes into the sport four years ago, as a student at Manawatu¯ College. “I wanted to get involved to lose weight and gain strength,” she said. But it soon became apparent that her gift was a natural god-given strength and to lose weight would compromise that natural ability, in a sport that championed strength. In those early days, she said her coach Shane Nation helped as much with the mental side of the sport as he did with the physical. “He said you need to realise that if we lose weight you won’t gain strength. I wouldn’t have been able to do it if I wanted to lose weight,” she said. “I had to convince myself. It became a mental game.” Summerell said learning to let go of false societal expectations around weight removed the biggest barrier to success. “I still struggle now, but he helped me in seeing strength and size as a positive. I want people to know that heaps of people struggle with different things and it helps to talk to someone about it or try and work through it.” She was initially drawn to weightlifting through an aunt that encouraged her to do CrossFit. Growing up on a farm meant the weightlifting side of the sport came easily. Manawatu¯ College was turning out champion weightlifters through Napier, who was also the school’s physical education teacher, so Summerell approached him to see if he would train her, too. The rest is history. Summerell competed in both the snatch and the clean and jerk in the 87kg and above division. Her best snatch this year was 89kg and her best clean and jerk was 109kg. Now, the world was her oyster. On the back of this year’s results, both athlete and coach had a discussion about her goals for the future, which could include moving away from the area. But Summerell has decided to stay local. She has just left school and started a new job, and was more than happy with her progress in weightlifting. “And it’s important to me that I fund myself,” she said. Summerell now had several New Zealand records and titles. She won her weight division at the NZ secondary schools championships, the North Island championships and the NZ championships. Last month she was named joint Manawatu¯ Secondary Sportsperson of the Year with Palmerston North Girls’ High School smallbore shooter Stephanie McNair. On the horizon was the World Junior Championships in Greece next year, and another online international event in February to train towards. Summerell had also just been told by NZ Weightlifting Association she was on the long-list for the Commonwealth Games in June next year, and any further improvement and competition points along the way would aid her chances of selection. Meanwhile, Nation was putting Manawatu¯ College on the map with the school’s weightlifting team. They were Manawatu¯ School’s team of the year last year, and again this year. “I am happy to coach anyone that wants to be coached, as long as they are committed,” he said. 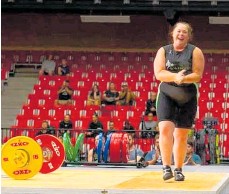 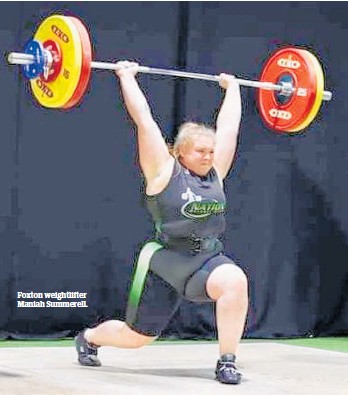