Womad NZ has ‘music for everyone’

after New Plymouth District Council secured a five-year host city partnership and committed to a $1.9 million underwrite in case Covid caused the event to be cancelled, a decision NPDC Mayor Neil Holdom referenced in his speech at the launch. “I'm not a person who gambles at all, but we [NPDC] put a $1.9 million bet on this, because we believe in Taft [Taranaki Arts Festival Trust].” He quoted his grandfather, who often told him “all work and no play makes Jack a dull boy”. Everyone in the room, said Neil, enjoys some form of leisure activity. “Surfing, cycling, partying. Just being in a room full of people, it's about that. The money is an investment in our community being able to get together . . . We [NPDC] do the enabling, Taft do the magic." The musical lineup for Womad 2022 features music for everyone, said Wano, who said she hoped the lineup included “someone you like, someone you love, and someone you've never heard of”. The lineup includes Kiwi artists as well as people from overseas who have “made their home here”. People have come from other parts of the world and brought their beautiful taonga with them.” The artist lineup includes the everpopular Topp Twins, who are celebrating 40 years in the industry. “That's a true testament to their grit and determination.” Other artists announced include Salmonella Dub, Hollie Smith, Ria Hall and Fly My Pretties joining the already announced Fat Freddy's Drop, Avantdale Bowling Club, Shades of Shakti, and Deva Mahal. As well as the musical lineup, comedian Tom Sainsbury, known for his impression of former deputy leader of the National Party Paula Bennett, was announced as one of the artists booked for the World of Words stage. Musical Artists appearing at Womad 2022 in alphabetical order: Acapollinations, Avantdale Bowling Club, Bobby Brazuka, Carnivorous Plant Society, Deva Mahal, Fat Freddy's Drop, Fly My Pretties, Hollie Smith, IPU Kodama Japanese Drum Team, Latin Aotearoa, Lord Echo, Mudra Dance, Niko Ne Zna, Ria Hall, Salmonella Dub, Shades of Shakti, Swamp Thing, Topp Twins, Weird Together, Yaw Asumadu & Ozi Ozaa. The final OMV STEAM Lab programme is being announced on December 3. Taste The World, Kidzone, and Te Pae Pae will also return with programming to be announced at a later date as well. Kurdish-Iranian journalist/novelist Behrouz Boochani, a former refugee who wrote his bestselling book No Friend but the Mountain on a mobile phone during his six-year detention on Manus Island, will be joining the previously announced New Zealand painter Dick Frizzell. Funeral directors and Netflix stars Frances and Kaiora Tipene (The Casketeers) were also named. Womad's World Of Words is a series of spoken sessions featuring novelists, poets, critical thinkers, entrepreneurs and more from around Aotearoa. Womad NZ 2022 will include a new Book Club feature. This will invite festivalgoers to share their perspective of a book and explore its themes with the author. For next year, the books and authors featured are Before You Knew My Name, by Jacqueline Bublitz, and The Girl in the Mirror, by Rose Carlyle. Taranaki Arts Festival Trust chief executive Suzanne Porter says Book Club is all about taking people on a journey. “I love how books can transport you across the globe, with the turn of a page, taking you on a journey, just like the music and worldly vibe of Womad. Book Club adds to the discovery, with the Womad audience sharing their perspectives of the books and exploring themes with the authors. This year's books will transport you from New York, across the Indian Ocean, and right back to Aotearoa and Womad NZ.” 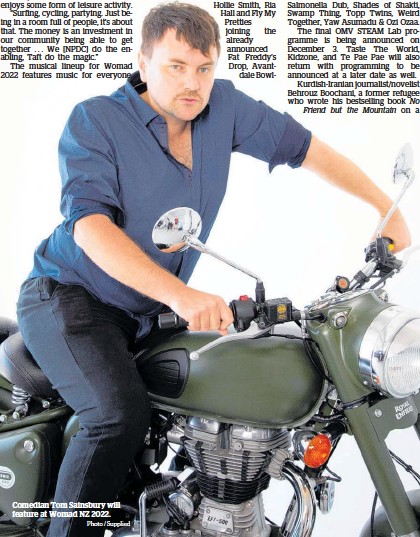