‘Representation of what Horowhenua College is about’ 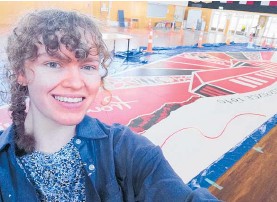 Horowhenua College principal Grant Congdon was excited to return from his sabbatical this term to see a new mural completed and hung in pride of place on the front of the college auditorium. The mural had been a passion project for Congdon and artist Hannah Wedlock, who graduated from the college in 2017. Congdon believed the blank wall of the hall was an opportunity, “to say what we are . . . more than a sign, [it’s a] visual representation of what Horowhenua College is about”. During their discussions, Wedlock and Congdon established certain design ideas including making the main college building the centrepiece of the mural as it is an iconic representation of the school. It was also important that images representing the cultural aspects of the college — especially Ma¯ori and Pasifika — needed to emanate out from the building. “It was a given in regards to the main colour used [being shades of red] and the fleur-de-lis symbol [being included],” said Wedlock. Congdon felt the inclusion of the Tararua Ranges was important as that image is so significant to Levin’s identity and he particularly wanted the phrase Proudly Levin included in that space, to reflect the college’s pride in being part of the community. Finishing a four-year design visual communications degree at Massey University at the end of 2021, this mural is the biggest piece Wedlock has created so far and is her first paid design job. She was honoured to have been asked to create a piece of work that would represent the purpose and heart of Horowhenua College. “The design process involved starting with the shape of the space [the mural would be hung on], being given the [actual] measurements then trying to work to scale on my laptop,” said Wedlock, “with the realisation that even small changes could impact the larger vision.” The mural is comprised of 24 fibre cement panels of varying sizes and covers an area of 16.54m x 4.6m (2.6m at outer edges), which meant the college’s campus manager (and structural engineer) Jono Johnson had to create backing/support beams to get it hung on the outside of the auditorium. The deans of Ma¯ ori students, Chris Wilton and Dylan Kiriona, said the left and centre panels of the mural have strong connections with local iwi. The left panel represents Nga¯ti Raukawa, the design taken from the heke (rafters) inside the old Matau whare, with the double koru design representing the hammerhead shark and meaning perseverance. The centrepiece panel represents the ho¯kioi bird and the maunga (mountain) of the Muau¯ poko iwi, with the bird being significant to the college, the local community and iwi. Dean of Pasifika students Jess Foster said student leaders came up with the design of the right panel — following the way patterns are repeated in Polynesian culture on tapa cloths and choosing a few patterns to represent most of the main Pacific cultures at college. Wedlock said the design needed to be bold and big as it’s being viewed from a distance and Congdon said eventually the college planned to install downlights to highlight the mural at night. The total process of creating the mural, from concept to finish, took Wedlock about 160 hours (nearly four weeks). “I had planned on two weeks which was a tad optimistic considering I’m a real perfectionist. It was kinda special as I feel like I’ve invested so much [into it] and I’m giving something back to the school community [as well].”