Wrestler on quest for Games gold 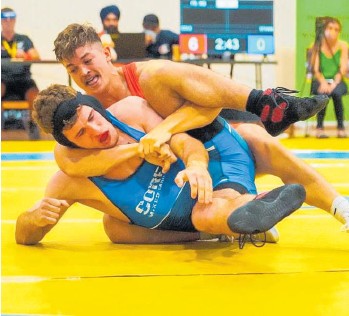 New Zealand wrestler Cole Hawkins — a former student of Fairfield Primary School in Levin — is on a quest for a Commonwealth Games medal. The 24-year-old, who attended the school until the family moved to nearby Manawatu¯ when he was 12, has his first Commonwealth Games bout on Saturday night (NZ time). Hawkins boasts a stout pedigree. His father Graeme represented NZ at the 1984 Los Angeles Olympics in wrestling, while his mother Colleen Sheldon represented New Zealand at the taekwondo World Championships. Even though Cole had always wrestled a little bit growing up, he only started taking the sport seriously two years ago, having previously represented New Zealand in canoe polo. It hasn’t taken long for Hawkins to make a name for himself in his own right. At the NZ wrestling nationals this year he was undefeated in his division, without a point scored again him. Since then he had based himself in Los Angeles — where wrestling is hugely popular — believing it the best preparation for a shot at a medal, training twice daily. He returned home to New Zealand briefly to have an injury niggle treated, but when he was named in the Commonwealth Games team in June he headed straight back to LA. Hawkins won’t lack for support the Games with mother Colleen and husband Robert Ervine there already, having packed their NZ flags and flown out late last week. Graeme Hawkins, who also competed at the 1982 Commonwealth Games in Brisbane, will be in the thick of the action at Birmingham as his assistant coach. Interestingly, his mother came across a photo from a stint living in Northern Ireland in 2010 when Cole played rugby for an Ulster club and struck up a friendship with a young player called Michael Lowry. Who would have guessed that the two boys in the photo would achieve what they have as young men — Lowry was part of the touring Ireland rugby team that created history last month by being the first Ireland team to win a test series against All Blacks. Hawkins, who played his junior rugby for the Athletic club in Levin, returned to Northern Ireland in 2019 where he spent a year playing canoe polo for a German club side, and then for Ulster in the European Cup tournament. He was also one of 70 players worldwide that year chosen to play in a Super League. Hawkins is competing in the under-74kg division this weekend. Wrestling heats start at 9.30pm on August 6 (NZ time) with the semifinals the same night, while the medal bouts would be held between 4am and 6.30am on August 7 (NZ time). As an amateur wrestler, his day job while in New Zealand was working in a sports store.