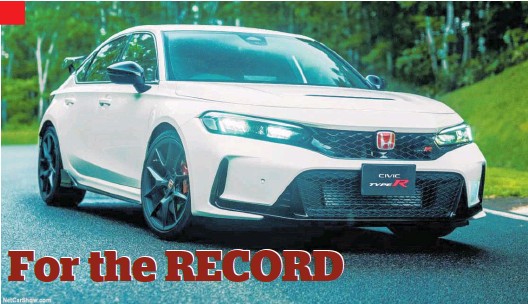 There are no numbers yet, but Honda is promising its just-revealed newgeneration Civic Type R will be faster and more powerful than the outgoing model – which was already at the pointy end of the front-drive segment with 228kW. Some international publications are reporting the new model will have up to 243kW (albeit on 98-octane fuel). It hasn’t been achieved with electrification of any kind. The new Type R sticks to an established formula (surely for the last time, given Honda’s move toward hybridisation and EV tech) by “further advancing the concept of the predecessor model”, says the company. So it’s evolution, not revolution, with an enhanced version of the familiar 2.0-litre turbocharged engine, front drive and a sixspeed manual with rev-match function. Honda says its three goals for the new Type R were for it to be the “fastest” front-drive car, with both an “addictive” and “secure” feel for the driver. The former is surely a reference to the FWD production car lap record for the Nurburgring Nordschleife, which the previous Type R held until 2019, when it was beaten by the Renault Megane 275 R-Trophy. The new Type R has already set a new FWD record around the Suzuka circuit. The LogR system fitted to the Type R gives real-time information on the performance of the engine and chassis. The new model has “low and wide” packaging, with flared guards fully integrated into the body. Red still features in the cabin and Honda claims new levels of support from a “polyhedral” seat design. The Type R goes on sale in Japan around September and other major markets in early2023.