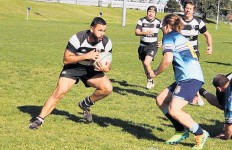 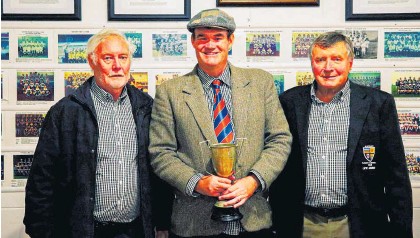 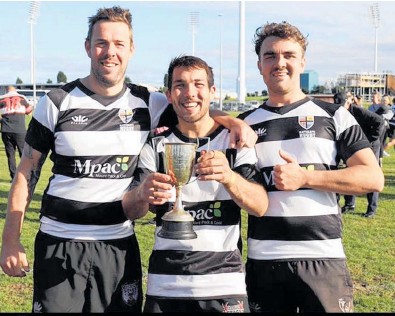 Katikati Stags have hit the highest grade in the Bay of Plenty with their win in the Baywide Premier promotion final against Marist St Michael’s from Rotorua. Coach Marcus Howie says the jump in status is huge for the club, as they will play against all clubs from around the province rather than second-tier teams in Western Bay of Plenty. “With the winner earning the right to go up into the Premier competition for 2023, both teams were prepared to throw the kitchen sink at each other and leave nothing left in the tanks,” he says. “This a massive opportunity for the club and the community, because this means we will be able to field two teams next year in a Premier team and a development team. “Katikati has not had a Premier Men’s team for over 20 years,” Howie says. “It also means we will attract all the local young men who have gone off to play for other clubs to play at this highest level. “We can also attract players from the Steamers and Super Rugby teams like the Chiefs if we recruit well over the next couple of months. ‘‘It also puts us in the spotlight, for players to be now in the spotlight to be selected for representative teams.” This game was the final played after competing in two different competitions throughout the season — one against clubs with only one team, and the other against clubs’ development teams. Katikati had topped the table in the clubs with one team in the Western Bay of Plenty earning them the right to play the winner of the central bay competition — Marist St Michael’s, who had won their matches against all other clubs from around the Rotorua area. Katikati played with a stiff breeze at their backs but it was their opponents, Marist St Michaels of Rotorua, who got on the board first through a try. Katikati soon replied with a penalty through skipper Gene Darvill to close the gap to two, which was followed with a well-worked try to barnstorming No 8 Sione Fakai, taking the Stags out to a 10-5 lead. Halfback Harry Thornhill had some time in the sin bin and the Stags worked hard to control the Marist attack with 14 men. At halftime, the Stags went into the break with the five-point advantage. The second half was huge and had some massive moments — firstly, lock Rory Wright found himself sitting in the sin bin, before he was joined by Thornhill and Darvill for infringements. Darvill’s yellow card was double punishment for the Stags as referee Sam Fellows issued a penalty try to Marist, with gave them the lead 12-10 with 20 minutes remaining. With men in the bin and being down to 12 players on the park, the Stags defended their hearts out and eventually forced a turnover which saw them get out of their half and earn a penalty. With 12 minutes to go, veteran midfield back Michael Petersen decided to take a shot from 35m out straight into the stiff wind, which he struck so well it sailed between the posts and gave the Stags a slender one-point lead going into the final 10 minutes of the game. Wright and Darvill returned to the park for the final 10 minutes. The Stags rolled up their sleeves and camped down in the Marist 22 for much of that time — wave after wave of attack saw the Stags held up on the goal line, which gave Marist St Michael’s the opportunity to clear out and force an error. Marist gave one last burst up the field to try to put the Stags away, but stout defence and a forward pass saw time up on the clock, the Katikati side winning and earning the right to move up to the Baywide Premier competition. The whole team stood up, but special mentions have to go to Michael Petersen for his leadership during some tricky times and kicking a goal that most goalkickers would have failed to convert under pressure; Chris BellFleming and Sione Fakai both had strong games, and props Peter Pole and Heremaia Murray worked very hard up front.