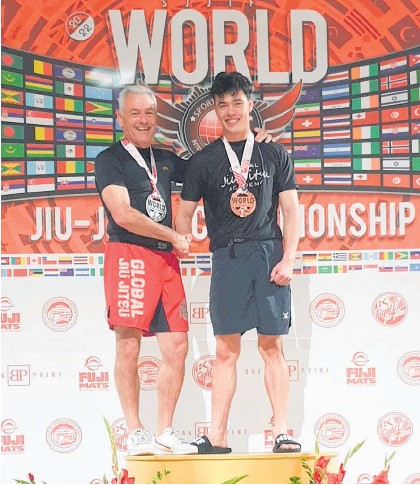 Katikati has another feather in its sports cap — this time a jiu-jitsu world champion. Aron Pearce has won gold in the male adult Gi (traditional kimono) middleweight division at the Sport Jiu-Jitsu World Championships held in Long Beach, California last month. Aron, 23, submitted all of his opponents on the way to winning the gold medal and becoming world champion. He fought six times against opponents from the United States, South Korea, the United Kingdom and Russia. In his second competition of the day, he also took the bronze in the No-Gi middleweight division, narrowly losing a close points decision to the eventual winner. Aron said it was a fantastic experience and the standard of competition was very high. But it was a hard day for the athlete, as he competed in two tournaments in the same day, and had to make weight (80.3kg) twice which meant limiting fluids between fights to ensure he didn’t go overweight. He loves the “high-level chess game” of top competition. “The hardest thing about the sport is the mental side, controlling yourself and [your] emotions on fight day. Staying consistent in training can also be hard at times.” Aron has been doing jiu-jitsu since he was 16. He took a break for university, but has been back training with Global Jiu-Jitsu Academy in Katikati for more than a year. Father Tony has been supporting him since, watching all his matches. Tony, 61, also competed in the Masters White Belt division and won the silver medal. There were no contenders in his age bracket, so he fought in the 36-41 age group. “We were both competing, not only at the same tournament, but literally at the same time on different mats — it was an unforgettable experience. I am so proud of him!” Aron works from home as freelance social media specialist and sometimes trains in mixed martial arts at Auckland’s Oliver Gym, but mostly trains in jiu-jitsu at the Katikati Academy. Tony says the local club probably has the best coach in the country in Lance Campbell, Commonwealth wrestling representative Suraj Singh, “and an absolutely fantastic team of coaches and members — and now it has a world champion in Aron”. Aron says he’ll forever be grateful for the team at Global Jiu-Jitsu Academy for helping him to prepare and realise his dream of becoming a world champion.