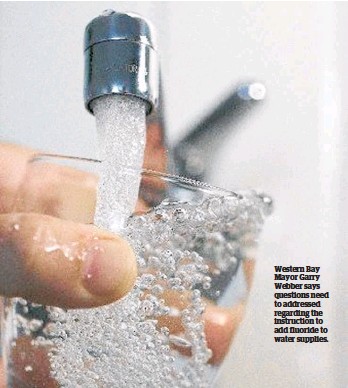 Western Bay of Plenty District Council has serious concerns with the directive to add fluoride to two of its water supplies. Council has been instructed by director-general of health Dr Ashley Bloomfield to fluoridate the drinking water supplies for Athenree and Wharawhara. The area covers Waih¯ı Beach, Athenree, Tanners Point, Katikati and the reticulated rural area through to Morton Rd. Fourteen local authorities have been directed to add fluoride to some or all of their water supplies inclding Tauranga City and Western Bay of Plenty District Councils. The district council has been asked to add fluoride to two of its eight supplies affecting the Athenree area. The Government was adding a financial sweetener with an invitation for the authorities to apply for a slice of an $11.3 million fund for capital projects associated with fluoridation. Western Bay of Plenty District Council is required to ensure that it is fluoridating at the optimal levels (between 0.7 parts per million to 1 part per million) by July 31. Failing to comply constitutes an offence under the Health Act. But Western Bay mayor Garry Webber says before council goes any further, there are several important questions which need addressing. “Yes, it’s an instruction from the Ministry of Health but there needs to be clear direction on the funding of capital and ongoing operating costs. We will be working hard to ensure there is no financial burden passed on to the community. “Also, why just these two water supplies and what are the ongoing implications? “Is this the beginning of fluoride being added to the entire district’s water supply?” Information provided by council to Dr Ashley Bloomfield in May 2022, under section 116E of the Health Act 1956 (the Act), and advice from the Director of Public Health to Bloomfield, has prompted the director-general of health to exercise his statutory powers. Bloomfield told council that in reaching this outcome, he considered the scientific evidence of the effectiveness of adding fluoride to water in reducing the prevalence and severity of dental decay. Consideration was also given to the financial costs of adding fluoride, the number of people likely served by these water supplies, and the likely financial cost and savings of adding fluoride to supplies, including any additional financial costs of ongoing monitoring and management. The director-general of health gave weight to the “significant benefit” provided to the townships to the state of its oral health in reaching his decision because “fluoridation of each drinking water supply would significantly reduce the prevalence and severity of dental decay in its community.”