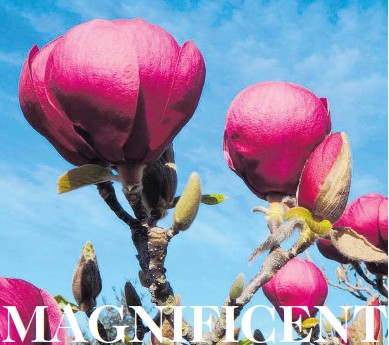 AT EXACTLY THIS TIME for the past three years, our magnolia has flowered. You can probably see it from your place — wherever you live. I was seduced into buying it about seven years ago because it was smallish (The Landscaper likes that) and looked relatively mild-mannered. And I was further convinced by its name ‘Little Gem’. Perfect, I thought. Today ‘Little Gem’ is ‘Enormous Gem’ at about nine metres tall and seven metres wide and dwarfs everything else in the garden apart from the ancient totara on the boundary. I think I know where I went wrong. Some friends who had rented the house while we were away for a year trucked in a huge mound of fabulously fertile topsoil in which to grow organic vegetables for their restaurant, and, when they left, it seemed an appropriate place for the magnolia. It got its roots into that soil in no time and the rest, as they say, is history. And I love it! Despite utterly hideous weather here for the past month — tropical rainstorms and crazy winds just about every other day — ‘Enormous Gem’ has hung onto its flowers with fierce determination and if it weren’t so windy it would be scenting up the entire garden. I haven’t bought any more ‘Enormous Gems’ but I have added to the magnolia collection with a slightly more sensible selection of smaller varieties and so far they’ve been very well behaved. Anyone who wants to grow magnolias is going to be spoiled for choice because it’s a genus of about 300 flowering plant species in the subfamily Magnolioideae of the family Magnoliaceae. They’re old souls, magnolias, having been on earth since before even the honey bee arrived. As a result of this they’re usually pollinated by some form of beetle. Not terribly romantic, but it seems to work. Having learned my lesson with ‘Enormous Gem’, I continued my magnolia obsession with a couple of ‘Mixed Up Miss’. It was the name that captured my attention but despite a hunt on Google I have no idea why these trees are so called. They have glossy green foliage and cream flowers that are flushed with pale purple at the tips. Once established they make heaps of fragrant blooms in spring. A sunny, sheltered spot with acid soil is ideal, and they promise not to grow any bigger than three metres. More recently, I was captivated by a Magnolia Bubbles at the local garden centre. We had a ‘Bubbles’ years ago but it got badly broken in a storm and I’ve yearned for another one ever since. Bred in New Zealand, it’s evergreen with glossy foliage, velvet buds, cream flowers with a pink blush and a lovely fragrance. It’ll do sun or semi-shade in a sheltered spot. It’s another little one, growing to around three metres. Mine is planted in a big pot which may not suit it, but so far it seems happy and has already produced its first flowers. Fingers crossed. Now I’m going to branch out a bit and find something deliciously pink. Magnolia stellata Dawn is said to be one of the best pink-flowering star magnolias. The flowers are pink in bud, opening to blush-pink and fading to white-pink. Three for the price of one, then. Should you yearn for something dramatic as opposed to traditionally beautiful, the New Zealand-raised Magnolia Black Tulip has large cup-shaped blooms of an exceptionally dark ruby-red. It flowers generously from a young age and is a vigorous grower. And don’t go past Magnolia Sentry. Its spicy-scented, tulip-shaped flowers are intriguing, with rich, pink-purple petals with a white interior. It’s a small (3.5m by 80cm) deciduous tree with a very narrow, columnar habit ideal for smaller gardens. If you have the space for a standout, over-sized magnolia, the evergreen Magnolia Grandiflora Blanchard may be your baby. It has a compact, columnar form and will grow about eight metres by five metres in 10 years. The large, glossy-green leaves have a thick under-coating of cinnamon-brown with a velvet texture, and it produces large, white, single flowers from spring through autumn. It’s good with full sun to part shade, is okay with exposed and coastal conditions, and will even grow in clay. How could you not love that?