Taare to perform songs from his album Goodbye Today

Carson Taare was 9 when he started learning to play the guitar at Newbury School. He didn’t like it and would forget his guitar on purpose. But then the school bought one so he no longer had an excuse. Taare, now 19, ended up enjoying those lessons and went on to play at an end-of-year concert. He was bitten with the performing bug. The Palmerston North resident is now making firm strides towards a career as a singer/songwriter/ musician. He is performing at the Globe Theatre on August 5 with a repertoire that no longer is just covers but his own songs. He finished at Palmerston North Boys’ High School at the end of 2019 and started working in the building industry. Last October he switched to refrigeration and air conditioning general labouring or “fridgie”. “You learn quite a lot, it’s quite interesting.” He’s busy with winter demand for heat pumps but continues to juggle his musical ambitions. In May, he was part of the lineup at the three-day Bay of Islands Country Rock Festival. He performed with Brendan Dugan and Jodi Vaughan and had solo slots. Taare is managed by Gray Bartlett and Mark Dennison and on the way back from Paihia, Bartlett arranged an interview with Newstalk ZB star Mike Hosking. “It was very cool, I really enjoyed it,” Taare says. “Mike Hosking is a very nice guy.” They discussed his goal of being the biggest star in country, and Taare performed his song Face for Radio. “[Hosking’s] a lot shorter than I thought he was going to be.” Taare’s first album was covers but over lockdown last year he wrote original album Goodbye Today, using the time to write and perfect. Goodbye Today was recorded in November at Neil Finn’s Roundhead Studios in Auckland. Taare plans to do another album, which will include Face for Radio. It’s about a DJ who talks to lots of people every day but is quite lonely. It’s an ironic situation as the DJ is in a socialable profession but doesn’t go home to anybody. Taare says he thought it would be nice to write a song about radio so if he was ever on radio he could sing it. The cat-lover says sometimes he doesn’t have an idea for a song in mind and just ends up writing, other times he just had a title in mind. It’s never melody first. Taare is not a fan of genre labels but considers himself a folk rock singer. He says there’s a lot of diversity in the music he listens to — Joni Mitchell, Harry Chapin, Glen Campbell and Bread. On August 5, Taare will be playing songs from his album Goodbye Today plus some new songs. One is Face for Radio. Joining Taare will be Jonathan Couper-Smartt on bass and flute, Hayden Lauridsen on drums and Nathan Lauridsen on lead guitar. He is grateful to his parents Mark Wilson and Jodie Whitehead-wilson for taking him to gigs, paying for guitar and singing lessons, flights and hotels. 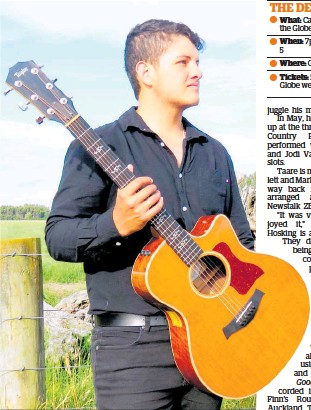