Vocal Favourites for a donation

Two of Manawatu¯‘s leading concert singers will perform at the July edition of the Globe Sunday Matinee Concert series. Soprano Jennifer Little and baritone Lindsay Yeo will sing a wide-ranging programme titled Vocal Favourites. In addition to songs from Italian opera and arias from Handel’s Messiah, Vocal Favourites includes familiar numbers from The Sound of Music, My Fair Lady, Porgy and Bess, Les Miserables and The Phantom of the Opera. The singers will be accompanied by pianist Guy Donaldson, who will also support the flow of the programme with piano solo items. Little is a past semi-finalist in the Lexus Song Quest, and has an extensive performance repertoire. She was recently the soprano soloist for Karl Jenkins’s The Armed Man and Mozart Requiem in Whanganui. She has performed as the soloist for numerous Last Night of the Proms concerts and military services with the Royal New Zealand Air Force Band. Little was a performer and co-founder of New Zealand pop-opera trio Tre-Belle for six years. Yeo became involved in singing while at Palmerston North Boys’ High School through school productions and various choirs, especially with the nationally acclaimed OK Chorale. He has competed successfully in various vocal competitions, and was awarded the Musica Viva Scholarship in 2014. Yeo also enjoys musical theatre, and played his first lead role this year as Billy Flynn in Act Three’s production of Chicago. He lives in Palmerston North with his wife Michaela and three daughters, and he works as an educational psychologist. 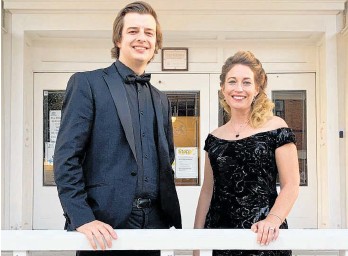