At more than $20 million dollars, it’s no small investment and Wattie’s is now running out of space at its Tomoana site in Hastings. The company officially opened its latest development yesterday, a sterilising plant for its pet food business. Wattie’s Tomoana site manager Malcolm Reid said it is a gamechanger for the company’s pet food division. “It secures the future for us in the industry and also keeps us producing locally, a huge thing for us,” he said. “We’ve replaced our old hydrostatic tower, which was something like 40-50 years old, with new retorts. “It makes sure manufacturing of the canned product stays in Hastings.” A retort is a giant steam pressure cooker. Cooking with steam enables temperatures well above boiling while the pressure conveniently prevents cans and pouches from blowing up. “We source a lot of our ingredients locally from around this Hawke’s Bay region but they come from New Zealand: we get lamb, beef, salmon, rabbit and venison.” Wattie’s pet food is sold in New Zealand and overseas, where the new plant’s 30 per cent growth capability is expected to come from, in established and expanding markets. “We export canned products into a lot of different countries across the world, particularly Asia,” Reid said. “There is a lot of demand for New Zealand-made pet food in Asian countries and we are starting to see that market emerge as a big opportunity.” Reid said a new shift will soon start to meet the demand for pet food in pouches, giving round-the-clock production. At the ribbon-cutting ceremony, with mayor Sandra Hazlehurst doing the cutting, he said there was good reason to be “rampantly optimistic” for Wattie’s pet food division. More people were keeping pets in emerging markets and in developed markets pets were receiving increased attention. “The key thing is to ensure NZ Inc is properly placed to be able to capitalise on that growth.” Hazlehurst commended Wattie’s on its commitment to Hawke’s Bay, and on its graduate programme. Three engineers from the programme were project managers for the pet food development: Smruthi Vishwanath, Kim Somera and Marc Spires. Wattie’s employs more than 900 staff in Hawke’s Bay, rising to 1500 with seasonal labour. In Hawke’s Bay Wattie’s processes fruit and vegetables, food ingredients, sauces and soups, and is part of Kraft Heinz. Kraft Heinz’s Australia and New Zealand chairman Mike Pretty said Hawke’s Bay was steadily picking up business from overseas plants. 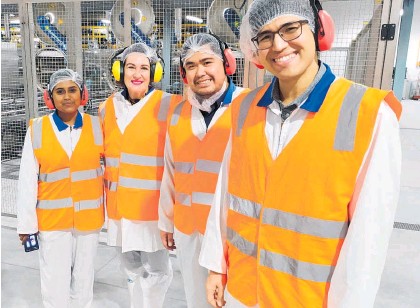