Four months of busy fundraising pays off for club 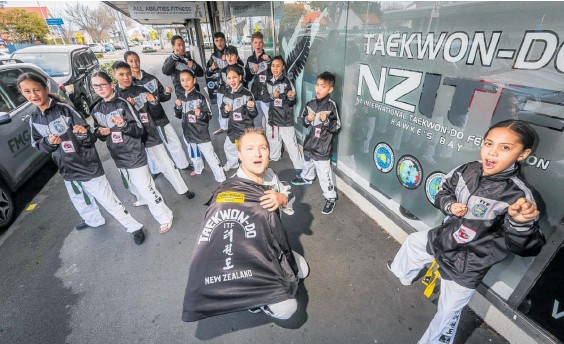 Four months of intensive work is how NZ International Taekwon-Do Federation (NZITF) regional director and coach Ben Evans describes the fundraising campaign to get his squad off to the ITF World Cup in October. The outstanding amount to purchase uniforms for the team finally came through, getting the team over the line and into uniforms last week. “We started our campaign late March. How crazy, we really did push hard when we look back. We did so much in such a short time.” Ben says the tracksuits are quite special. “Each uniform has the New Zealand text on the back and some of the students gave ideas for the design, which we merged and made the best looking tracksuit. The jackets have all the silver, gold and crystal sponsor logos on them.” Ben says the team was happy and proud to wear their uniforms. “They said they were good, warm and comfy. Their smiles say it all. They’re proud to wear them and be good ambassadors of New Zealand on the world stage.” Fundraising for the $75,000 needed for accommodation, airfares, competitor fees, uniforms and equipment for the kids, kicked off with a car raffle which brought in $20,000 by Cars4u HB boss Regan Munro. “We also had a lot of support from sponsors Pak’nSave Tamatea, BidFood, Hastings District Masonic Trust, Hastings District Council, Napier Council, Napier Mayor Kirsten Wise, Maxine Boag, Kevin Derwin, Sport HB and Crystal Sanctuary in Napier. “We did raffles which the Hawke’s Bay community really supported and got behind. We did our recent hangi, raffles and housie fundraiser event which pretty much helped us to raise the remainder. It was a huge team effort. Bunnings Hastings really helped and got behind us with sausage sizzles.” Fifteen mainstream competitors, including Ben, parents and supporters, will be off to the world champs in Argentina from October 4-10. The team flies out on October 2. “I want to thank everyone — our parents who have helped and the community. Our team is working hard and is excited to go. “Our kids are young and strong and ready for whatever lies ahead.”