Janine Gard is a diploma-qualified birth educator and founder of Bellies to Babies antenatal and postnatal classes. This week Janine talks about baby hiccups. 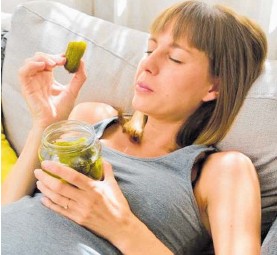 Pop . . . pop . . . pop! If you’re in your second or third trimester and your belly suddenly feels like a popcorn popper, chances are baby’s got a case of the hiccups. By the time those first fluttery baby movementsturn into actual jabs, punches and rolls, you’ll likely also begin to notice the telltale rhythmicmovementsof fetalhiccups as well. But whydo babies hiccup in thewomb, andhow often is normal? Ohno, is she okay? Is she in distress? Are they annoying her? Readon to learnmoreabout hiccups in utero. So, what are fetal hiccups? Quite simply, baby hiccups in thewombare the littlemovementsbaby’sdiaphragm makeswhenthey begin to practice breathing (don’t worry they aren’t breathing air just yet). As baby inhales, amniotic fluid enters their lungs, causing their developing diaphragm to contract. The result? A tiny case of the hiccups in utero. Several theories exist as towhy babies have hiccups in utero. For example, hiccups might: Help inlung maturation Help the diaphragm tomature fully ■ Occurwhenbaby is practising sucking, swallowing and breathing Various studies have been done to look atwhybabies have hiccups in thewomb. They’re not 100 per cent surewhyhumans gethiccups. Their exact purpose isn’t completely understood. We know, however, hiccups are rarely a cause for concern, and it isn’t something most pregnant peopleneed to be concerned about. Having hiccups is a normal body reflex, even ifwedon’tknowwhy it happens. Whatdofetal hiccups feel like? Fetal hiccups are quick, repetitive motions that you can tell are definitely coming from your baby. At first, youmaythink it’s a soft kick, but then it’ll happen again and again and, yes, again. If you pay close attention, you’ll notice that the rhythm mirrors yourownhiccups, which are also caused by diaphragmmovements— but of course in the grown-up version, instead of amniotic fluid, your hiccup is followed by a rush of air. Howoften isnormal? Because every pregnancy is unique, there’s no hard and fast rule as tohowfrequently fetal hiccups should or should not occur. Sometimes they can occur randomly and often, sometimes several times in a day. Still, somebabies don’tseem to hiccup very much, and that’s fine too, as long as you feel other movementsin the belly. Hiccups, while in utero are one of the most commonfetal movementsyour baby will make. That being said, all that ‘popping’ can be quite distracting, especially if you’re trying to get through, say, a work meeting (or anap!). But as is the case with ourownhiccups, there isn’t a surefirewayto stop baby’s hiccups in thewomb. Somesuggestions are changing positions, walking around and drinking water might work since anynewstimulus encourages baby to shift gears. But the bestwayto deal with fetal hiccups? Simply embrace them, your baby’s hiccups are one of manythings that are a part of pregnancy, Eventually, it gets to a point where you won’t notice them much. Howcanyoube sure the movementsyou’re feeling are normal? Your tinyhumanmaking tiny hiccups might be kinda cute (or kinda distracting, depending on your mood). Trust your instincts. Never hesitate to contact yourLMCwith questions or concerns. Although fetal hiccups are perfectly normal and healthy for baby, any concerns you have about baby’smovements should be addressed immediately. Bellies to Babies Antenatal & Postnatal Classes, baby massage courses and baby and infant first aid courses, 2087 Pakowhai Rd, Hawke’s Bay, 022 637 0624. https:/ /www.hbantenatal-classes.co. nz/ This page is for educational and informational purposes only and may not be construed as medical advice. The information is not intended to replace medical advice offered by physicians.