While school's been out for the April holidays, children have been making the most of everything Rotorua has to offer recreationally. A number of children have spent time during their school holidays letting the creativity flow at The Arts Village's Holiday Arts Academy. The Holiday Arts Academy is taught by local artist and educator Maui Riley, with week one focused around painting and week two on 3D creation skills. Plenty of the children were extremely enthusiastic to share about what creations they had brought to life from their imagination. David Barsdell, 12, says he has been doing drawings and making masks. He also made an alien tripod, based on The War of the Worlds. He says it has been fun and peaceful at the arts academy, and he likes that you get a great feeling when you've completed a creation. Samuel Burt, 12, says he has made masks, a shield and a sword. “I like that you get to make whatever you want and get to be creative.” Ryan Fraser, 10, has enjoyed making creations from his imagination shields and masks. Quinn Aldridge, 8, proudly showed one of the pigs she had made. She says they got pet pigs during the holidays which was her inspiration. Kiera Fleming, 9, says she has had a lot of fun, and has enjoyed making new friends and being able to experiment. Eyjar Nelson, 11, says he has made masks and a sausage dog. “I like being allowed to create so many things and learning lots about art.” Isabel Chapman, 10, says she made masks and a hot air balloon out of papier-maˆche´. She says she also likes to do including lots of art at home such as drawing. Ella Aldridge, 9, says she has been working on making Saturn out of papier-maˆche´. “I like that you're allowed to experiment and you can do what you want to.” The Arts Village also has free All-ages Art-making sessions going these April school holidays, and the last one is tomorrow from 10am to 2pm. Children of all ages are invited to come together to make art in activities led by local artist Jane Rotherham. This is a drop-in session in Studio Two where children can attend without booking. Parents/guardians must accompany children. 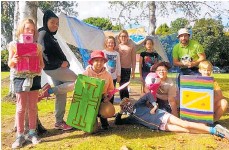