For the first time, Matapu School has won the interschool athletics challenge shield. Principal James Wilson says that in the 20 years the Kaponga Inter-Schools Athletics Competition has run this is the first time the school has won the Daniel Fitzgerald Family Shield for overall winners. “We’ve come close to winning the shield before but this is the first time we’ve done it. The pupils were rapt. There was a lot of cheering when our names were called out.” The shield is given to the school that receives the most points in the competition. “Each child gets a point for participating and bonus points for placing in the events. It was great to see the pupils pushing themselves and entering the different events so they could earn more points. It was nice to see the kids working together because they wanted to win the shield.” James says four schools take part in the annual competition. “The other schools were Aurora, Kaponga, and Manaia Primary Schools.” The school received 124 points. “We won by just one point against Aurora.” The school also won the Chapman Cup for winning the bagged relay. “In previous years the schools have to take part in a number of heats to get through to the finals. This year the schools just had to take part in one race before the finals. The relay is capped at 40 years of age so we added our runner’s ages together. We’re lucky at Matapu School to have some fast kids and it was their time to shine and they really did.” He says the competition is beneficial for students. “They socialise with different kids from other schools for a nice and friendly competition.” James says the community has reacted positively to the school winning the shield. “We’ve heard a lot of positive comments from our schooling community but we also shared a post on Facebook that received a number of nice and positive comments.” 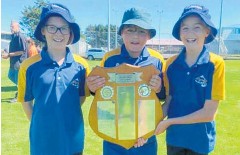