Atourist who left her lost tramping group and continued on alone likely survived the first night but froze to death in blizzard-like weather on Mt Tongariro the next day. These are among a coroner’s findings in the 2019 death of 51-year-old Ji Li, according to a report released on Tuesday. Li, a farmer from China, was on holiday in New Zealand when she was last seen on October 18. She was reported missing the next morning, and her body was found at the bottom of the mountain’s Red Crater later that day. Hypothermia has been ruled as the direct cause of Li’s death. Li and three other women left the Whakapapa Village to begin the Tongariro Northern Circuit Great Walk on the morning of October 18. The group missed a turnoff but did not realise their mistake until they arrived at Tama Lakes, several hours off schedule. Despite her companions’ decision to turn back, Li decided to continue on alone. Described by her son as an experienced hiker, she had appropriate clothing and equipment, including an emergency bivouac and a mobile phone, but did not have a personal locator beacon. Li’s route from that point is unknown. However, Coroner Matthew Bates said the most likely scenario was Li stayed the night in a hut and resumed her journey the next day. Bates’ report said Li would have encountered extreme weather conditions which would have resulted in “extreme cold, fatigue, and disorientation”. On that date, Mt Tongariro experienced blizzard conditions — galeforce winds with a wind chill factor of -4.4C. Factoring in wind chill, the New Zealand Mountain Safety Council estimated the temperature would have felt like -20C. The council advised that in those conditions, she would have become hypothermic and her cognitive and decisionmaking abilities would have declined. As walking became more difficult, it was likely she would have stumbled and fallen. It was not clear whether she intentionally or accidentally descended into Red Crater but she may have been seeking shelter. A tour guide searching by helicopter spotted Li at the bottom of Red Crater on October 19. Police said Li was partially tangled in a cord from her bivouac bag and her head was partially in her sleeping bag, suggesting she may have been trying to get into it to warm herself. “Unfortunately, due to the effects of hypothermia, she was likely mentally and physically impaired to such a degree that she was unable to get in the sleeping bag. In those conditions, she would have lost consciousness quickly and eventually died.” Her backpack was found tucked under a large rock nearby. She was not wearing a hat or gloves. The coroner found no evidence to suggest Li fell from the high bluffs nearby. In his findings, Bates agreed with the Mountain Safety Council’s assessment that the group’s decision to attempt this three-day trip in two days was overambitious and unsuited to the weather and timeframes. Li’s decision to continue the trek alone was also a contributing factor to her death. He said the circumstances of Li’s death was “a tragic reminder of the risks inherent in solo mountain hiking” and recommended solo hikers always use personal locator beacons. “Had Ms Li been in possession of a personal locator beacon and activated it, she may be alive today.” He also recommended signage improvements to include greater use of widely spoken foreign languages. Responding to the finding, the Mountain Safety Council said the group should have checked the weather forecast before setting out, chosen a different route according to their experience, and stayed together. An Indian tourist died near Red Crater in 2018 when he became separated from his hiking companions and attempted to complete the walk on his own, clad only in a hoodie, sweat pants and running shoes. The Mountain Safety Council has information and resources on safety in the outdoors as well as videos of popular tramping routes at www.mountainsafety.org.nz 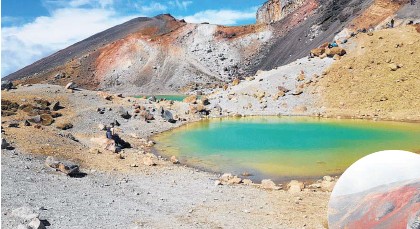