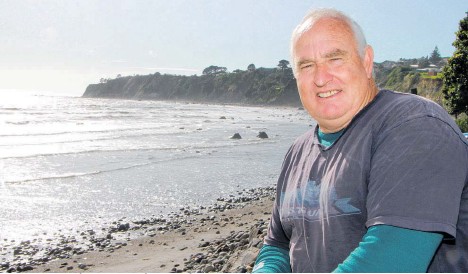 Known by some as the Mayor of Maketu¯, after four terms, Shane Beech has decided to call it a day. Shane has been a member of Maketu¯ Community Board for 12 years — nine of those as its chairman — but at the board’s final meeting of the current triennium last week he announced he would not be going around again. “I joined when Carol Poihipi was chair and I was vice-chair for her — then I took over as chair for the last three [terms],” he says. He says there isn’t one single reason why he is stepping down, but feels he is going out on a high. “I’ve achieved a lot of the stuff I first went in there with and tried to bring to the board and to the Maketu¯ community, so I feel a lot of that has been completed.” In 2010, when the district was made up of five wards, he felt Maketu¯ was the poor cousin. “I really wanted to have our board spoken about at council and being given the opportunity to be an equal among the whole lot — that refers to the funding, the infrastructure, the utilities — and in a way, I think we are [spoken about] now. “We have a good voice at the table and we are seeing a lot of things coming our way. “There have been a lot of improvements, so in that respect I’m happy.” Although planning began before he joined the board, one of the major milestones was the opening of a $15 millionplus wastewater treatment plant serving Maketu¯ and Little Waih¯ı in 2012. “That was already on the go, but it was coming up to the people of Maketu¯ for consultation and I was a big part of that — the structure and how the council was selling the project to the people of Maketu¯, getting their buy-in and the feel of it.” Shane says he has been part of some major developments. “I’ve been lucky to be involved in quite a few projects — a new playground at the village green, the Anzac Rock, and being able to help out organisations like Rotary with the installation of [waterfront] exercise equipment. “We’ve seen a lot more footpaths come into Maketu¯, and the cycleway is also a big bonus. There’s a lot of other stuff in the future coming in as well — more footpaths, a possible community hub, things like that.” He says the cultural history of Maketu¯ is a positive for the area, but is also something that “can be challenging”. “With up to five different iwi, you’ve got to communicate with them all and hopefully come up with a good resolution to move forward — that comes with its challenges, but I think if a project is worthy of it, then it will go through.” The district’s attractiveness to visitors and the increase in the number of permanent residents are likely to present challenges for future boards. “It’s got one of the best kai moana facilities in the area — everyone wants to come and be part of that — it’s got great beaches, fishing diving, swimming, surfing. It’s about educating people. Yes, come and enjoy the place, but leave your footprints behind and take everything else with you.” He says any frustrations around his time on the board come from the time it can take things to happen. “We are still looking at projects that we looked at in 2011 that are still in the concept phase, and a project that may have cost, say, $50,000 in its day, it’s probably five times that amount now. That’s a frustrating thing — time and the increasing prices.” Shane says he feels now is the time for someone else to take over the reins. “I feel the board is in a good way. Maketu¯ has a nice nestegg in the reserve account.” He says that anyone thinking about standing shouldn’t be shy. “If you think you’ve to something to contribute to the board or to the community, by all means put your name forward. Don’t think that you have to have been born or lived many years in Maketu¯ — I think as long as you call Maketu¯ home and you are passionate about the community, and if you are keen, put your name forward.” Shane is secretary/ treasurer of the Maketu¯ Volunteer Fire Brigade and president of Maketu¯ Coastguard — roles he will retain — and owns Maketu¯ Beachside Cafe and Restaurant and Maketu¯ Beach Holiday Park. “I was born in Maketu¯ and raised here, so I can’t see myself going anywhere.”