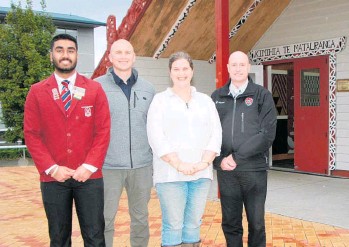 Te Puke High School is hoping to hear from people who are wanting to contribute. Nominations for candidates to stand in the upcoming election for the school’s Board of Trustees close on Friday, and current chairman Jim Smith says anyone who feels they have something to contribute to the school should consider putting their name forward. He says the board’s focus is on the big picture, not the dayto-day running of the school. Quick-fire questions, challenging scenarios, and crowdsourced queries are all part of the dynamic plan to get to know candidates better at the local body elections this year. In a first for the district, Western Bay of Plenty District Council is running a Meet the Candidate Debate series, featuring one debate for each ward and the mayoralty during the week of August 29. Rethinking the traditional political debate format, these events form part of the council’s Generation Change / He panoni a¯ reanga campaign focused on engaging all members “It’s about having a look at what the future of the school could be and setting the school up to progress towards that,” he says. “Ultimately the goal is to give all students the best education possible, and really it’s [for] anyone with a bit of passion towards that.” The board meets once a month and there are around two hours of preparation needed for each meeting. There are plenty of opportunities for training, and board members can get a better of the community in a bid to help voters get to know who’s standing in the elections. Residents will play the role of inquisitor, and can use these events to lift the lid on where candidates’ values lie or ask about pressing matters for their wards. An invite is coming for the community to submit questions in advance of each debate. The questions will be grouped into themes and a handful will then be selected and posed to the candidates on the night of the debates. Members of the audience, in person and online, will also be understanding of how the education system operates. “It’s also an opportunity for people who may have some aspirations towards governance, and personally, it gives me, for a relatively low input, access to something [where] I feel I can give a contribution back to the community.” Nomination forms have been emailed to parents and caregivers and need to be returned by Friday at noon. Nominations for most other schools have already closed. able to influence what they want to hear from candidates on during the debate. An online voting system based on question themes will run throughout the night with the highest-voted theme informing the final question. Those unable to attend in person can tune in and take part via livestream on council’s Youtube channel or generationchange.nz. “We won’t be shying away from hot topics — you can expect to see candidates being asked about their stance on Three Waters reform, housing and growth, and cogovernance with tangata whenua,” says council CEO John Holyoake. “These debates are about ensuring everyone gets to know who is standing and wanting to represent them for the next three years. “We’re making it worthwhile for all voters, whether they’re politically motivated or more interested in the values a candidate stands for.” The debates are happening early in the campaigning process to ensure the community has plenty of time to learn about each candidate. People will also have a valuable resource to refer to when voting papers arrive from September 16, as all the debates will be published on generationchange.nz and council’s Youtube channel. The events also present an opportunity for budding politicians and civic-minded students to get onboard, as each ward debate is being hosted at its local school. “We’re looking to partner with local high schools and our host schools to ensure tamariki and rangatahi can be involved in this process. “The next generation will inherit the decisions our elected members make now, so it seems only fitting we invite them along and present them with an opportunity to ask questions and host the events,” says John. Meet the Candidate Debates all start at 6pm: ■ August 29, Katikati-waih¯ı Beach Ward, Katikati Primary School ■ August 30, Kaimai Ward, Pahoia School ■ August 31, Te Puke-maketu¯ Ward, Te Puke High School ■ September 1, Mayor Debates, University of Waikato, Tauranga, Lecture Theatre, Level 2