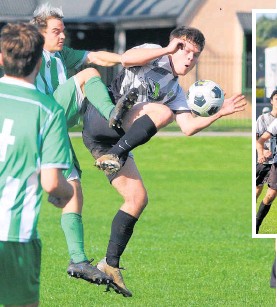 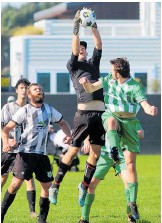 TFOOTBALL e Puke’s men’s side lost by the odd goal to a strong Otumoetai side at Fergusson Park on Saturday. Te Puke were under pressure and on the back foot early, but managed to keep the host’s attack out. While trying to play some nice football, Te Puke could only manage a few opportunities that ended up either finding the post or were off target. Neither side was able to capitalise on their efforts before the half. The second half kicked off much the same as the first, but with chances coming both ways, Te Puke continued playing defensively while looking for quick counter attacks, but still couldn’t get a breakthrough. The visitors fought hard to keep the home team away, but Otumoetai managed to sneak in a header from a corner giving them the only goal of the game. Te Puke pushed for an equaliser, coming close, but just couldn’t find the target ending the game 1-0. Player of the day was Matthew Morison with some solid defending The men’s side play Claudlands at home on Saturday, kick off 12.30pm. After a long spell of no game time, the women’s team was pumping to get back into it and it showed with a dominant win over second-placed Tauranga City. Te Puke started off strongly with some nice passages of play, looking to draw out the home team’s defence. It paid off early when a build up from the back with some lovely one-two football ending with a through ball to Rosa Atkins who calmy put it over the keeper. Twenty minutes in and Sammi Parrish got the Black and Whites’ second goal after a nice bit of play had her open in front of goal. Tauranga looked to get one back, but couldn’t finish their chances, while a perfect corner from Te Puke saw Chynna Davie get on the scoresheet and the visitors 3-0 up at half time. The second half started with the same intensity with Davie getting her brace early in the half. The game settled down with a bit of back-andforth play, and Tauranga City managed to get one back in the 65th minute, but Te Puke tightened up and gave their opponents little space. With 10 minutes to go, Atkins found herself in front of goal again, sealing her brace and the win, 5-1. Player of the day was Maia Moko for her work in the midfield The women’s side play Lakes FC at 12:30 at Litt Park on Sunday. The over 30s lost 3-2 to Blue Rovers. 500 CARDS July 4: 1st Barry Woodward 3410, 2nd Lou Schnuriger 3280, 3rd Lyn Mcnaughton 2790. July 11: 1st Dawn Smith 3740, 2nd Barry Woodward 3500, 3rd Guy Campbell 3330. July 18: 1st John Williams 3730, 2nd Lou Schnuriger 3520, 3rd Lyn Mcnaughton 3430. July 25: 1st Mary Schnuriger 4350, 2nd Guy Campbell 2480, 3rd John Kelliher 2330. GOLF Te Puke Golf Club Ladies nine hole: July 27 Putting: Lyn Erni 15, Marie Flexman 16, Bronwyn Loynes 16, Jackie Merritt 16. Hidden hole: Lyn Crone. Longest putt: Vicki Jackson. July 30 Net: Jacqui Middleton 36, Vicki Jackson 36, Bronwyn Loynes 37, Lyn Erni 37. Hidden hole: Helen Cartwright. Longest putt: Rae Ashton. BRIDGE Te Puke Bridge Club July 25 — Kilted Kiwi Pairs, Session 2: 1st Keith Reddaway/ Dorothy Gibbs, 2nd Jan Hill/janet Burrett, 3rd Byrta Wagstaff/june Day. Overall winners: Jan Hill/ Janet Burrett. July 26 — Seeka Limited Pairs. Error with computer, played but not scored. July 29 — Irma Handley Teams, Session 2. 1st Maurine Roisleux/ Margaret Somers, 2nd= Delcie Martin/judy Calvert, Bev Nairn/ Eric Mcewan. ■ Only emailed sports results will be accepted. Please send emails to news@tepuketimes.co.nz