Despite Covid alert level changes thwarting two attempts to hold an official site blessing ceremony to mark the occasion, work has started to build the $73 million Waikato Regional Theatre in Hamilton’s CBD. The aim is still to hold a small, simple launch event before Christmas, Covid allowing, but either way, a new regional theatre is under way. Project coordinator Momentum Waikato invites those interested to head to sharethestage.co.nz and “Join the Audience” by signing up for updates, invitations and information via email as the project progresses. Share the Stage will be the main channel for theatre news. Momentum says Share the Stage is a fundraising and communitybuilding campaign for the theatre — with “some fun stuff” expected in the months ahead. Waikato Regional Theatre is being built at the Hamilton Hotel site in the south end of Victoria St. The development will retain and restore the facade of the old Hamilton Hotel, a heritage building. The site is bordered by the Embassy Park with the Riff Raff statue to the north and Sapper Moore-jones Pl (formerly Marlborough Pl) to the south. Site work began in mid-october, with Fosters Construction fencing the perimeter and setting up their office. Since then Embassy Park has been cleared and the careful removal of heritage elements in the former Hamilton Hotel started. That work included the Riff Raff statue being lifted off his perch — he’s gone into hiding for a few weeks ahead of his temporary installation outside the Waikato Museum for the duration of the theatre build. Ross Hargood of the Waikato Regional Property Trust and Leonard Gardner of Foster Group this year signed the theatre’s construction contract. Ben Royfee was appointed site manager for Fosters, joining Graeme Ward at RDT Pacific and Tim Strawbridge at Fosters, the respective firms’ project managers who have already been working on the project for some time. In early August the large trees on the riverside of the site were taken down, the first actual site works for the theatre. Fencing has now gone up around the site, the first major sign on the street-front that physical works are getting under way. The new theatre’s auditorium, in its most open configuration, will seat an audience of 1300 patrons. Venues currently operating in Hamilton provide seating capacities both greater and smaller than the proposed new theatre. The Meteor seats 200 and the Clarence Street Theatre can take 300 to 550, while the Claudelands Arena is set up for 6000 and FMG Stadium Waikato for 25,800. Momentum says the new regional theatre’s 1300 seats fill the gap in the capacity range left by the closure of Hamilton’s Founders Theatre. The Waikato Regional Theatre’s auditorium will be able to be reconfigured to host a wide variety of performance genres. Acoustic features and a wide stage will enable orchestral concerts, rock gigs and performances such as kapa haka. A drop-in proscenium arch will then allow for plays and other more intimate, small-scale performance such as stand-up comedy. A variable orchestra pit will be used for musicals. The flexibility of the staging and arches allows for the quick turnaround of show set-ups, meaning the venue can host multiple performances within any given day. The building and kitting out of the new theatre is being funded by a mix of public, trust and philanthropic money. Major commitments include $25m from the Hamilton City Council (equivalent to the cost of the repairing Founders), $5m from the Waikato Regional Council (proportionally levied on regional ratepayers, based on distance from Hamilton), $15m from Trust Waikato and $12m from the Provincial Growth Fund. The balance is being raised through philanthropic donations from individuals and trusts, fundraising, sponsorship and applications to relevant central government entities. The Hamilton City Council is also committed to providing $1.1m a year towards maintaining the theatre building. 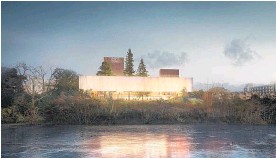